Beginning March 1st through March 31st, you can enter to win one of four fantastic prizes! There are three ways to enter so don't miss it!

for details on how to enter.

Hi,
Are you a MOM and
searching for a mom to share your feelings and gain valuable advice on
parenting, pre-pregnancy, pregnancy, babies, early childhood, schooling,
teenage years and many more. Then here is what you were looking for.


Momzoo is a social networking community for moms of all ages and stages of motherhood to connect moms in which they can share their feelings with other like minded moms and can find blogs on variety of topics, forums, live chat… Continue

At the suggestion of my friend here's my post about teething. Among other 2 year toddler tortures.

I think that she found the title more amusing then what we are going through. At least I hope!

With our first son, I knew right away that teething wasn't going to be a party, but everything else that goes with it....really! The worse then normal diapers, the constant runny nose that I felt compelled to explain to everyone "no really, he doesn't have a cold he's teething". I… Continue

Well I have finally joined the official "domain owners" society! It's definitely a work in progress.....but you should check it out!

Peace Hugs & love to all my mommy bloggers!
www.magabelleez.com

Ahhh, well! Now I know what she means by furmom!


If you’re tagged, you need to tag five pretty moms, as well as the one who tagged you.


The idea is that if you get tagged again, you will know you are really pretty!


Add your name to the bottom… Continue

Okay, I'm a day or two late finishing this series, but I'm also striving to raise two toddlers to be the best that they can be, so work with me here.

"The Spirited Child" is a term I have heard used so loosely, and I have used loosely, many times. It's always been in the context of "he/she's spirited" to… Continue

deep down the heart 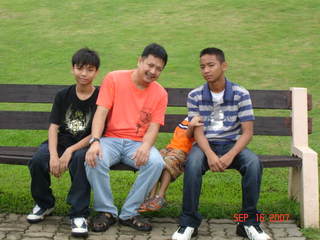 My youngest daughter has this problem. Well I don’t really see it as a problem but my husband does. As he likes to say, she cusses like a sailor. Now I don’t actually see this to be anything but normal genetics. She is after all her mothers daughter. Boogie (that is her nickname) likes, no loves to say “oh shit!” Now I’m sure that many parents will scowl at the fact that I’m ok with this. In my defense, she says please and thank you, excuse me after see burps and will even make sure everyone in… Continue

So my three year old daughter has and complete infatuation with play dough. This is probably her favorite pastime and used to be her most expensive until I decided to cut out the corporate american middle man and make my own damn play dough.. See every time my daughter played with this stuff it seemed to disappear. At first I looked for it, but after a while I just dreaded what I might find if I actually go searching. With three kids there are some things better left a mystery. I did later find… Continue

Do children come with manuals?....

My partner and I feel like maybe the do, because our manual just arrived last Friday. Maybe a little late, but better late then never!

Between the discipline suggestions and reminders from my troops, and the discovery of a book titled "Raising Your Spirited Child". We feel like maybe children DO come with manuals. When persistent enough in finding out what they need, what their triggers are, what we need as parents, and ultimately what we need as a family to be… Continue

WELCOME TO MOMZOO: a blogging community for moms

Hi,
Are you a MOM and
searching for a mom to share your feelings and gain valuable advice on
parenting, pre-pregnancy, pregnancy, babies, early childhood, schooling,
teenage years and many more. Then here is what you were looking for.


Momzoo is a social networking community for moms of all ages and stages of motherhood to connect moms in which they can share their feelings with other like minded moms and can find blogs on variety of topics, forums, live chat… Continue

How long does it take to put your "mommy pants" back on after they've been missing?....

Well for me it took until 1:00 p.m. the following day. They boys went to school and I parked and talked on the phone with my cousin who had been calling for the past two days to check on me.

I had heard about a book "Raising Your Spirited Child". We've always know that both of our boys are spirited, but what did the really mean? Anyone that knows me, has heard me say more then once "I am obsessed with the need to understand what is triggering their poor behavior to begin with". I'm… Continue

Where do our "mommy pants" go when they are completely missing, like socks from the dryer?....

I'm not sure, but they were missing for a couple of days. Flat our missing. I looked everywhere. In the wash, in the closet, under the bed. Nowhere to be found.

However, my 3 year old did find his "no" mouth again. HHHHMMMM, just about the time that I lost my "mommy pants". I wonder which came first?

We spent two days going at it like a couple on the brink of divorce! Time-outs did nothing but make him cry and frustrate me because his "no" mouth just returned a few hours… Continue

The Secret to Happiness

The secret to happiness is ...Low Expectations!

I saw a report last night on 60 Minutes where the second year in a row, the happiest place on earth is Denmark. According to the story, no one was more surprised than the Danes, themselves. They live low key, low stress lives with low expectations.…

My Tale of Squats

I should have known better than to go to Whole Foods on Valentine's Day.

It was full of hurried and harried Very Important People rushing to get that gorgeous bouquet of flowers, that filet mignon, that bottle of Pellegrino, that Stilton cheese.

Somehow, yesterday's shopping experience left me feeling that it was entirely inappropriate to bring my 2 year old along to the grocery store.

It all begins in the parking lot -- the perpetually full parking lot. SUVs… Continue

Normal day, let me be aware of the treasure you are.
Let me not pass you by in quest of some rare and perfect tomorrow.

Who decides when miracle days fall from the sky?....

How does this happen, and who decides when this happens? Is it the parenting Gods/Goddesses? Is it as simple as a good night of sleep for all of us on the same night?

We had such a rough day on Sunday. We were cooped up in extra cold weather. READ: 8 - 24 degrees! Well beyond the "they're boys bundle them up and throw them out" advice. Plus that means that I'm out there too....NOT! They were tired of their toys, we were tired of tap dancing to keep them entertained. You know, puzzles… Continue

Valentine's Day is only a few days away. I was just emailed this story,
author unknown. Let this be a cautionary tale for you men out there!

A husband walks into Victoria 's Secret to purchase a sheer negligee for his wife. He is shown several possibilities that range from $250 to
$500 in price, the more sheer, the higher the price. Naturally, he opts
for the sheerest item pays the $500 and takes it home. He presents it
to his wife and…


Are you a MOM and
searching for a mom to share your feelings and gain valuable advice on
parenting, pre-pregnancy, pregnancy, babies, early childhood, schooling,
teenage years and many more. Then here is what you were looking for.…