If you get a chance please visit my blog www.gracenotes95.blogspot.com for the latest posts on MckMama's baby Stellan. Her sweet boy is still in the hospital and I am always amazed at the outpouring of prayer coming her way. He is now 5 months old, but when he was in utero the doctors told MckMama he would not survive...yet he was born perfectly normal, baffling the doctors...a miracle. And now we need another miracle. Please visit, please pray.

Are u looking to earn some extra cash from the comforts of your home,while enhancing your life and the lives of others (family and friends). If so contact me (Anisia) atworkathomeunited.com/anisia. thank you for your time and be blessed
thanks anisia

As a lead up to Earth Day on April 22nd, Earth Promise will post an interview each day between April 1st and April 21st giving different perspectives about the environment from influential people in the green community. The subjects in the “21 in 21” interview series will give their opinions and thoughts on various topics from how each person greens their lives, the impact they are making in their fields, recommendations for what we can do for the environment, thoughts on President Obama’s… Continue

Brains of Bulimics are Different According to an article published in the January 2009 issue of the Archives of General Psychiatry, women with… Continue

So this week I had a great chat with LeNesha Carey of My Business Adventures and picked her brain about all sorts of good stuff to do with starting a business and running a family. She is by far one of my FAVOURITE mompreneurs...her attitude is incredible and the business sense she exudes seems to come totally naturally to her. Her blog is chock full of juicy tips, tricks and resources with a great balance of posts about her personal… Continue

The importance of an affiliate program to small businesses

I’m sure you’ve heard the saying, “One head is good, two is better”. Well this is the basic principle of affiliate marketing.

You marketing your website for yourself is great. But if you have 10 people marketing for you, that is much better.

This is how affiliate marketing benefits you, the small business owner.

Let’s say you spend all your time marketing, you don’t have time to create your product. Or to manage the paperwork, get to the mail box or follow up on… Continue

Oh well, Easter break is just around the corner - 2 weeks of not having to rush through breakfast, getting dressed and out the door - all while I retain my sanity on only one cup of coffee.

How to Save Money on a Saturday - Coupons and Church Sales

Today was a great day, and even better — a frugal day. We got up after 9 a.m. (somehow Landon seems to know that it’s the weekend, during the week he gets up around 7:30 a.m. I needed that sleep, I had been up until 2 a.m. again blogging!) and ate a healthy breakfast. I made oatmeal because Landon asked for it (ot meow). I spend a little time on my computer marketing my blog (Twitter and Facebook updates, an e-mail to my friends) and got ready to head out. I wanted to check out the rummage sale… Continue

As parents our role is to teach our kids, but sometimes they teach us:

Monet minerals is a mineral makeup company owned by Rachel Solace. It is free to join until the 31st. Why join? There are so many benefits: Rachel makes her own minerals. Rachel is a wahm, just like you. Mineral makeup is good for your skin, soothing, and doesn't clog pores. Mineral makeup is less costly then traditional makeup, and much less messy. No jars to cause spillage! No expiration on… Continue

Hey everyone – today’s oil is Ylang Ylang. This is the smell of love: www.melindasblends.com/todaysoil.aspx 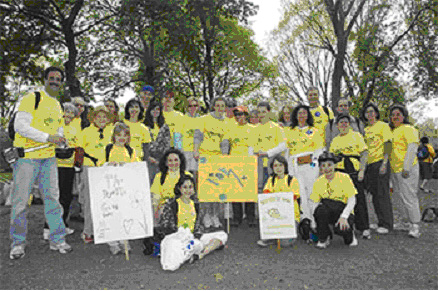 
The Parkinson's Unity Walk is the largest grass roots event raising Parkinson's awareness and funds to find a cure for Parkinson's Disease. 100% of all donations raised goes directly to Parkinson's Research.

Are You There Yet?

by Steve and Debbie Wilson-January 22, 2009
If we get past the fears and circumstances God uses to shape our character, what's next. Real Love! That's right, a love that carries us through the best life can offer. If you want that kind of love, you must do the following:

Live Beyond Yourself...You must move from your world to a struggling world to a spiritual world. The incredible part of this journey is that once God opens your heart and moves you beyond your world and your… Continue We've known for decades that abused and neglected children develop anxiety, depression and addictions more often than other children, and that they're more likely than their well-cared-for peers to engage in self-destructive behaviors or attempt suicide.
Until recently, what's not been understood is whether the… Continue

If you don't know this already, I'm hopeless with pop culture. Here is my list of admissions/confessions:

- Despite my older children being ages nine, eight, and six, I have never seen an episode of Hannah Montana, heard a Jonas Brothers song or seen a High School Musical movie;


- I wouldn't know Adam Lambert if he sang a tribute to me;

Being a professional makeup artist in film and television I see a lot of perfectly shaped eyebrows. My job is so easy when an actress or model sits in my chair fresh from a grooming with her eyebrow guru! However, there are times when I have to shape or clean up an eyebrow prior to makeup application and there are many tricks of the trade that I rely on when using tweezers, razors, brow fillers, tints or gels.

Flawless brows enhance the look of your eyes and face. Following the… Continue

We called it! The April issue of Elle Magazine featuring Reese Witherspoon announced it's winners of the 2009 Genius Awards and Jurlique is one of the top products in Emily Katz's professional makeup kit. Emily is one of the Elle 2009 Award Winners and is the makeup department supervisor on the television show Lost!

Check out In My Professional Opinions archive post on Jurlique:

Giving good “face” is not just about makeup. The number one problem I have as a professional… Continue

It's been over 90 days now and I am just thrilled with the results of going through P90X. If you have not heard of P90X, it is a wonderful workout program designed to get you in the best shape of your life in 90 days.


P90X comes with 12 workouts with a 3 Phase workout plan and calendar along with a suggested diet plan. The goal is to keep your body guessing about what is coming next with the idea called "muscle confusion." Your body never gets used to one thing for two…

Well I have finally taken the time to add a post to this site :).

Even though I have been blogging on my other site for over 2 years now I'm still new to all this :).

I am sitting here thinking about how wonderful it is to belong to this 'membership' we call motherhood. My friend for over 15 years is now pregnant with her first child. She is 31, and they tried for over 2 years to start a family. I am in awe that she will now be a part of this 'club'. I wish her the best,… Continue

Didn't know if I mentioned that other than being a doula, mixing herbal concoctions and soaps, being a reiki practioner, handcrafting childrens toys, being an artist, and a storyteller, and a MOM...that I also sell Barefoot Books?

This weekend Barefoot Books is offering free shipping on all orders in the Continental US, through Tuesday March 31st. Would love to have you check out my web-site http://www.BarefootBooksStoryteller.com