Dr. OZ is kind and warm. What a great Dr. 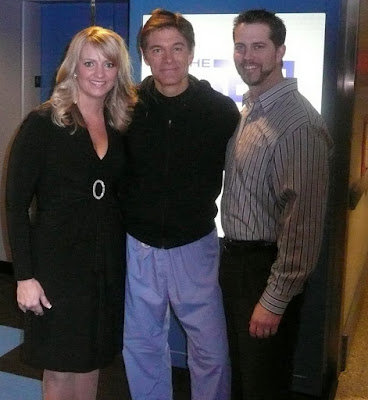 Me, Dr. OZ and My Husband 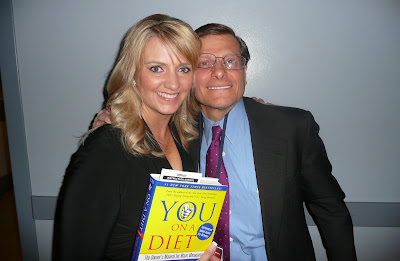 Me and Dr. Roizen who wrote You on a Diet…

Meet with Donna Galanti, author of ‘A Hidden Element,’ book 2 in The Element Trilogy

Donna Galanti writes murder and mystery with a dash of steam as well as middle grade adventure fiction. She is the author of books 1 and 2 in the paranormal suspense Element Trilogy, A Human Element andA Hidden Element, the short story collection The Dark Inside, and Joshua and The Lightning…

Last week has been so full of crazy busy-ness that I wasn’t able to do much with the blog or the family. I did grab a spare hour and was able to paint some decorations for Little M’s room. So now I present to you, the LUMA’s!! Fair warning though. I suck at painting. Bad. I think my three year old paints better than I can.

These are simple wooden stars that could probably be found at…

Every since Mathew received his diagnosis of Autism I have been researching constantly. There are so many ways to help out a kid on the spectrum but a lot of them are considered alternative methods and therefore not covered by insurance or recognized by health professionals as being extremely helpful. Thus far we have been blessed with doctors who were ok with trying some of the alternative ways of dealing with the problems. One way is to get a specially trained service dog. Typically people…

Hi everyone! I have put together a 3 part series to show how to make your commute a little better.  I do actually drive 1 1/2 hrs to work and 1 1/2 hrs home so I have picked up a few ideas to make the drive not only bearable but actually kind of fun.  Let me know what you think

** The first day of school is a blessing like no other.

** Homework's about to unleash its evil wrath upon us very, very soon.

My BEST TIPS for Back to School Shopping

I just had the BEST, BEST day with my 6 year old.  She’s about to head into Grade 1, and we hit the mall for some back to school shopping together.

Do you look forward to back to school shopping or is it something you dread as the school year approaches?

I love shopping for anything or anyone, but I’ve learned that shopping with 3 kids can be a challenge… each waiting for the other to try on different items.  Eventually the boredom sets in and it’s hairy-scary…

Where to Find Discount School Supplies?

There are so many subscription boxes out there these days. You can get a box of surprise goodies for just about anything. I decided that it might be fun to try some out and write about my impressions of them. After compiling a list of the ones that I had heard of I decided that the list was too small and limited. If this was going to be done right I needed some variety in there.

What better way to find huge lists of something than on GOOGLE?! Boy did I dive in head first without…

Footing the bill for college

A decade from now when my son does an Internet search on me and comes across this blog, I want him to read this post in which I state the following:

I love you, and I am not footing your entire college bill.…

Hair conditioners are specifically designed to give strength, repair the damaged cells and maintain the essential moisture levels in the hair. A number of conditioning products are in the market, but they contain harmful chemicals, silicone and synthetic ingredients that can really damage your hair. Use of chemical based products only makes your hair dry and dull. Leave-in conditioner/protector is basically used to…

Want to Have Fun – Create A Family Game You can find serenity in learning that it can be really fun to create a family game.  In most areas around the country, the new school year has either started or is about to start. At the same time, many families enjoyed the closeness and fun of the bonding and fun of summer vacation. One way to keep the fun going throughout the school year is to create a family game.

The great thing about a family game is that you do…

A Little Sprinkle Of Your Support... Is All They Need!

Well, the last night of summer is fast approaching, and I’m feeling sentimental about the end of another summer with my kids.  While I was thinking about all this last week, I got an idea that I am happy to share with all of you.  This little idea is not based on a family tradition, but is a new idea that I will be trying in my home on the last night of summer.  I thought you might like it too!

So, when my three children crawl into bed on that last exciting night before starting a new…

17 things I told my son about Highschool

So you’ve heard about this thing called an “editorial calendar.” But if you don’t work in marketing, you might not know what the heck I’m talking about. And no matter what field you work in, figuring out how to create an editorial calendar that you’ll actually use can be a challenge. So what gives?

Why they work
Editorial calendars are one of my favorite ways to keep my work organized, especially as it pertains to my blog. It’s a place where I can keep…

As mentioned before, when it comes to mornings, I am awake and ready to go. This ability served me well in middle school and high school when I was responsible for getting myself awake, dressed and to school (via the bus or my own two feet) on time. I set my own alarm and I…
Continue

So on my Facebook page there have been a few requests for a recipe that we made a few nights back. Not wanting to deprive anyone of one of the best soups I have decided to add it to the recipe archives. This is not a family recipe on either side. Oddly enough we got it from our local health and wellness center but it doesn’t seem to be on the especially healthy side.

What Does it Mean to be Brave?

What Does it Mean to be Brave?

I don't listen to the radio very often. But I did the other day. So it was the first time I heard this song. I almost switched the station, but the first line caught me, then the rest took me by storm and left me in…
Continue