Fun in the snow. 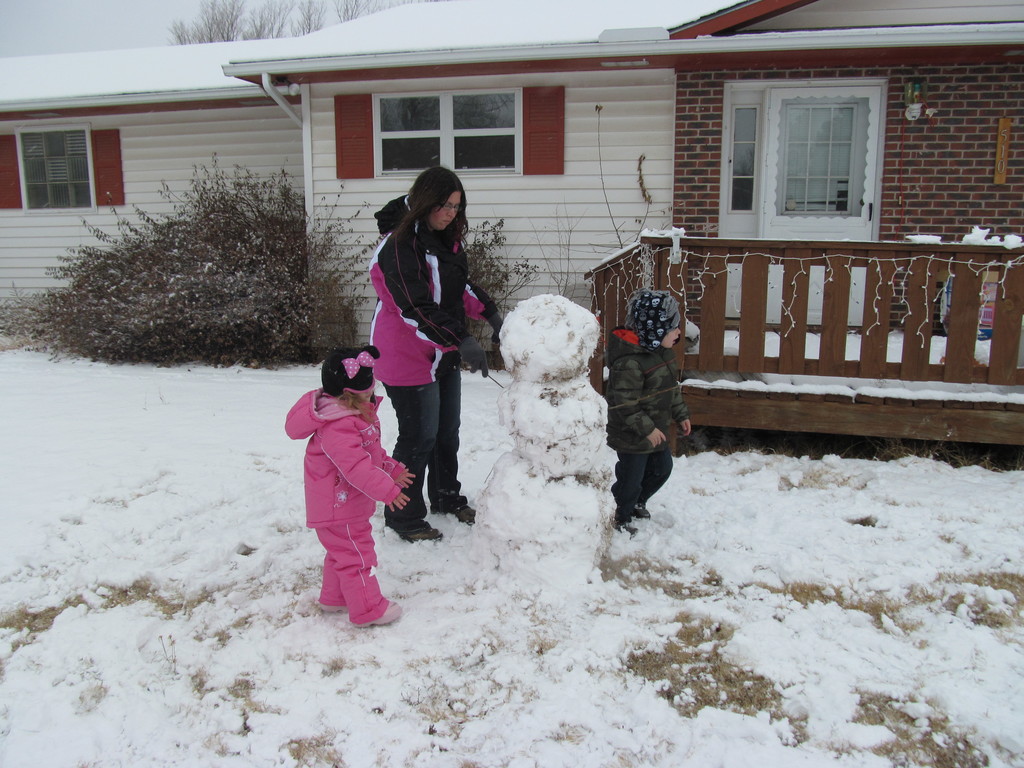 How is your New Year Eve going everyone?  The kids and I have really enjoyed the snow that has fallen today and so glad that it was a decent amount at that.  We really need the moisture here in Kansas!  TJ built his first snowman and it was the first time for Talia to really get to have fun playing in the snow (she tried this weekend but was not enough today was a blast…

Hypnobirthing is another child birthing method that was discovered in 1944 by obstetrician Dr. Grantly Dick-Read.  He felt that women could have a safe, easy, relaxed child birth experience by using hypnosis during child birth.  Many women often times will tense up when their contractions start becoming unbearable; instead, of working with their body using breathing and relaxation techniques.

Learn more about the benefits to using hypnosis during child birth…

Let me just start by saying, whoever thought that taking a road trip when your 8 months pregnant… wait, no.  I should really start by saying how sweet it was that my hubby took the time to plan a little family getaway after the holidays.  In all honesty, it was an awesome idea; one I would normally love if I weren’t 8 months pregnant with a God awful back problem.  I knew this would be quite an adventure as it was, taking 2 toddlers and a psycho dog to the mountains.  Now…

After a long break, I decided to do away with the internet for a year to cut expenses,I am back.  In this last year so many things have changed and I shall say it may be a little rough at times but it is slowly getting better and more enjoyable.

Things that have happened in this last year during my break from a computer:

Who Needs Rechargeable Batteries When You Have...

There is nothing like working in the restaurant industry to make you doubt the sanity and rationalizing abilities of our species.

Like yesterday, when I had a woman ask for a new wine glass because her glass smelled funny.  Let me repeat that.  The GLASS SMELLED FUNNY.  The wine was fine, but man that cup had to go.

It takes a certain type of crazy to deal with people like that.  Luckily I seem to have it covered.

If you haven't had a chance to plan a New Year's eve party for you and your kids, here are some last minute ideas that take little or no preparation, yet are still fun and a few are meaningful! Happy…

If you haven't had a chance to plan a New Year's eve party for you and your kids, here are some last minute ideas that take little or no preparation, yet are still fun and a few are meaningful! Happy new year!

Courtesy of a shared link from the Facebook page Humor is Contagious.

Christmas Was Awesome. But it Left My House a Total Mess.

I can’t believe that tomorrow is New Year’s Eve. It literally seems like it was just weeks ago that we brought in 2012. The year went by so fast and life changed in the blink of an eye. It went by so fast, in fact, that I don’t even have any resolutions for the New Year – other than to just enjoy life as it comes!

We’re still recovering from Christmas. If you could see what my house looks like right now, you would probably be…

Please Keep Your Hands Out Of The Potty

Our 2-year-old has decided she is ready to potty train. Combined with the fact that it is 25 degrees outside, our dog keeps peeing on our snowmen, our twins have been out of school for over a week, my wallet was stolen on Christmas Eve, andmy husband’s basketball team lost by 40 points the other night—our…

To Tell Or Not To Tell

Sunday arrives. I still haven’t decided if I’m going to tell my family or not. I just don’t know what to say or how to say it. Well, let me be honest, my younger sister and my younger brother already know. So basically who’s left to tell are my older sister and older brother and my parents. My older brother won’t be there today, and my older sister is easy going and will probably be excited. She loves babies. My parents are my concern. I have no idea what reaction to expect from them. And…

I hope everyone enjoyed their Christmas! My holiday was filled with so much laughter, appreciation, gratitude, and food, I wish I could run through it one more time. Now, my excitement holds fast for an approaching new year. As usual, for my daughter, this was…
Continue

I've been through the "new baby" phase... twice... and I thought it was due time that I share some of my treasured tips that have helped me through the first year with a new baby.

Save Those Instructions!
All those wonderful toys, gadgets, and baby furniture come with instructions. Instead of shoving them in a drawer, keep them handy in plastic sleeves in a binder. You would be surprised at home many times you may reference those manuals. Plus, if you…

Sensational Saturday - Good Books - Guess How Much I Love You

Sensational Saturday - it is sensational to read a book that is good for you and your kids.

Over the course of the last few weeks, the Sensational Saturday articles have focused on older books that are good for you. We have looked at the non-religious inspirational aspects of the Bible,   Malcolm Gladwell's Outliers for its…

A Dollar in a Card

Just celebrated my birthday...yes 29 again. I received quite a few cards this year. I got the biggest kick when I opened two that each held a dollar. The memories it brought back...

While my dad was in the hospital, years ago now. One of the many cards that arrived had a dollar in it. As he lay there looking at all the cards he told my mother , if each one had had a dollar in it they could have gone out to dinner. A very special aunt of mine started the tradition...now I try to put a… Continue

On Thursday we decided to take Jacob out for a walk. He was going a little bit stir crazy from being indoors. The weather was not exactly lovely, so we got suitably dressed and headed out.

Steve decided that he wanted to go to St. Catherine's Hill. We had never been there before, but you can see it plainly from the M3 when driving towards Winchester from the south. It looks huge from the road

ORGANIC IN MY OWN WORDS

My journey started about 3 years ago. We found out we were pregnant and I went into overdrive trying to clean up my diet…no soda, more water, less Chipotle. Well I wasn’t able to give up Chipotle lol, but the fact remains I had a growing baby to take care of in my belly and I wanted to cook the best quality food for my family. Read More

The Bradley method is another popular birthing technique that is used by many expectant mothers who wish to have an unmediated natural delivery.  This method was developed by Dr. Robert Bradley in the late 1940s.  He wanted women to realize that birthing was a natural process and that many women can give birth without medical intervention or drugs.  Dr. Bradley encourages women to maintain a healthy lifestyle by eating correctly and exercising during…

** Santa needs to be A LOT more organized next year.

** I may never see my son again now that Wii U is hooked up in the basement.

** Goatdog REALLY likes to open presents.  Especially ones that don't belong to him.

** When it snows, everyone seems to have forgotten how to drive.

** Teepeeing the inside of your house…

We made it through Christmas!

Every year it comes faster and faster. It builds to this glorious day of gluttony and gifts and then it's all over. Just. like. that.…