Amanda Koopman is now a member of Mom Bloggers Club
Thursday
Welcome Them! Our family recently took a 6 day trip to Maine for our niece’s wedding. The wedding was amazing (and our son was possibly the cutest ring bearer EVER – and YES, I’m biased).

The flight to Maine with our 3 and 1 year old kids was surprisingly pleasant.

While I didn’t expect our return trip to be AS smooth, I certainly didn’t anticipate my son’s meltdown IN the airport, OR my usually easygoing daughter’s inconsolable cries in flight.

We decided to eat before the flight to stop the kids from getting hangry (i.e. SO hungry you’re ANGRY). We split two burgers between us. A good idea…until I gave some to my daughter.

My hangry son wanted a WHOLE burger. Tears streaming, feet stomping, trying to flee; he was OUT OF CONTROL. Not desirable behavior in the airport (or anywhere).

15 minutes later, we convinced him to either calm down and eat, or have NOTHING.

His public meltdown left me embarrassed and nervous about the looming flight. Thankfully, my son was great on the plane. If only his meltdown was the end of the travel drama.

My daughter’s ears must have hurt. During the 2.5 hour flight, she screamed intermittently until she passed out with 20 minutes left. My biggest concern going into the flight was a poopy diaper; screaming was SO out of character. Ugh. A stinky diaper would have been BETTER.

After snacks, rocking, toys, and the tablet failed, our emergency plan was to give each child a sucker. She was a sticky, spitty mess. AND it ran out before we landed, so she had TWO. AND she screamed off and on anyway, while flailing that sticky sucker into my hair.

I felt terrible for her, and worse for those who drew the short straw and had to sit near us. She raised a ruckus. When she FINALLY passed out, I held my numb, tingling arms completely still, and prayed she would not wake.

My husband and I were frazzled and felt like we’d been through a war. With emotions flying high, it felt like the whole trip had been a stressful disaster.

But in reality, it wasn’t. Each child had exactly ONE meltdown in 6 days. During the last 20 minutes of the flight, I tried to ‘reset’ my own attitude about the trip.

7 DO’s and DON’Ts after your Child’s Public Meltdown:

1. DO cut the child some slack – Acknowledge the conditions that occurred before the meltdown. Most of the time, over-stimulation, lack of sleep, or hunger may be to blame. Be grateful it didn’t happen earlier! In our case, neither child was trying to be naughty, noisy or embarrassing. They slept in strange beds, stayed up late, and were over stimulated from activities and fun with family. They were exhausted!

2. DON’T keep bringing it up  – When your child is finally calm (if old enough to talk about it), discuss why the behavior was not OK, and then FORGIVE and MOVE ON. Re-living it keeps your stress level up, and reminds your child that they were recently upset; with potential to be upset again. There will be time to analyze and determine what could have been done differently LATER, when the emotions have worn off. If you’re having trouble, STOP and pray about it, and if necessary, just be SILENT.

3. DO the math – Take stock of their behavior OVER ALL. Recognize ALL the moments the child was GOOD and don’t let one 15 minute meltdown characterize their entire day. In all likelihood, this meltdown is less than 1% of the day, even if it felt like an eternity. CHOOSE to remember the good behavior.

4. DON’T allow embarrassment to alter your parenting – Be consistent regardless of the environment. Giving my son the whole hamburger to make him be quiet would have sent a message that his behavior was OK. The next time we share food, we’d likely deal with the same thing all over again.

5. DO take compliments from strangers  –  A man sitting by us told us we were patient and did better than he did when his kids were small. I initially brushed it off, but in reality, we did well. We did everything we could, using our preset backup plan (suckers) when it was needed, but stayed patient and recognized her ears probably hurt. Strangers do NOT have to say anything to you, so if they do, accept it as the truth!

7. DO build each other up – You and anyone with you will be frazzled. Encourage each other, and encourage your child. Emotions are running high, and extra grace and kind words will go a long way towards moving forward.

Despite a somewhat emotional travel day, the kids were amazingly well behaved during the rest of the 6 day trip despite new surroundings, late nights and busy schedule. It is easy to focus on the chaotic end of the trip, and say we won’t travel with the kids anymore or until they are bigger. If we do that, we’ll miss out on great family memories and on seeing amazing places. Here is a family picture from the wedding, and how I choose to remember our vacation. 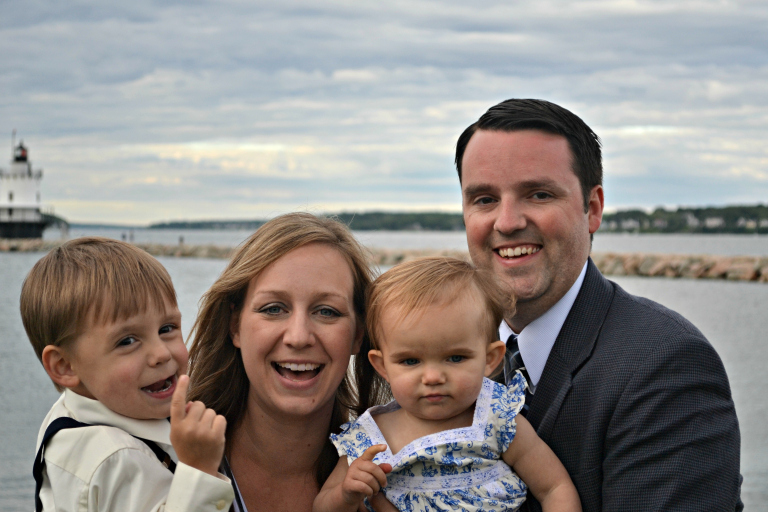