Battle of the Brands: Part II 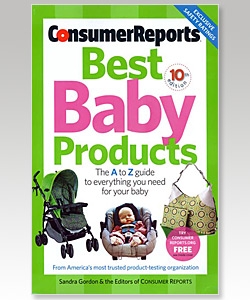 A little over a month ago, I wrote a post on how baby formula was equivalent to brand name formulas such as Similac and Enfamil. When Hunter came into this world, I was torn between what the doctors, nurses, and friends were telling me what I should do, and what was right for me. When it was all said and done, I went down the formula path, and in the end It was the perfect choice. You can read that post here.

Through MomSelect and BSM Media, I was sent the
Consumer Reports Best Baby Products, which is a fantastic resource for all moms out there. On the cover, it states "it's the A-Z guide for everything you need for your baby", and they're not lying. Lots of useful information that, in just one year, has changed dramatically.
Consumer Report shares the best tips for buying formula, features to consider, what's available, etc. Now, though, they suggest you "consider a store brand". K-mart, Target and Wal-Mart have store brands that are nearly identical to the name brands, and you wont be paying and arm an a leg for them. Through research done by Consumer Report themselves, they found that store brand formulas were at least 40 percent less per ounce than Similac. And, it states that the FDA has marketed all formula in the US with the same nutrient specifications. I'm so happy that FINALLY the word is getting out there that not only is formula ok, but generic brands are equivalent to name brands.

What is infuriating to me, though, is that Enfamil will do anything they can to make you believe their product is the end all be all. They know that moms are now becoming thriftier and turning toward the generics, due to the slow economy and the fact that modern day prices are through the roof. They want to keep making the money. Why would you want to pay 22 bucks for a can of Enfamil when you can get the same nutrient rich forumla for almost half the cost? Enfamil, however, has been pretty decietful. In a recent landmark federal court case, the verdict confirmed that Mead Johnson (who are the makers of Enfamil Lipil Formula) has engaged in false advertising of their products, saying store brand formulas do not contain the same nutritional benefits as their own Enfamil. In the end, the jury found the statements false and misleading, simply because store brand formula has exactly the same nutrients at the same levels as Enfamil. Sneaky, sneaky.

In the process of this court case, the truth has been exposed about formulas which is this: store brand infant formulas are nutritionally equivilent to, and confer the same developmental benefits as expensive brands such as Enfamil and Similac.

Just something to chew on.


*In no way am I stating that formula is better than breastmilk-breastmilk is hands down always better for baby. However, as moms, sometimes breastfeeding doesn't work out for one reason or another. If you do use formula, this is just to inform you that you do not need to over pay for the expensive stuff*

Comment by Emma sasaru on January 31, 2010 at 11:24am
All formula milk has the potential to be harmful and no formula milk should be recommended or pushed as breastfeeding is always best for mom and baby as the benefits are endless and with a little help and support moms can be sucessful . The who code is good to look at http://www.who.int/nutrition/topics/exclusive_breastfeeding/en/

Comment by Stephanie Amuso on January 12, 2010 at 11:30pm
Thank you for this post! I formula fed both my girls and with my first child I fell for "only the best" mentality (and first time mom paranoia) and bought Enfamil. The second time around I used Parent's Choice. I even asked my Pediatrician if it was nutritionally-equivalent, and she turned her nose up at me and mumbled how it wasn't the best. I firmly asked her again if it was safe to use and she reluctantly said yes! We saved alot of money and I have two incredibly healthy kids!