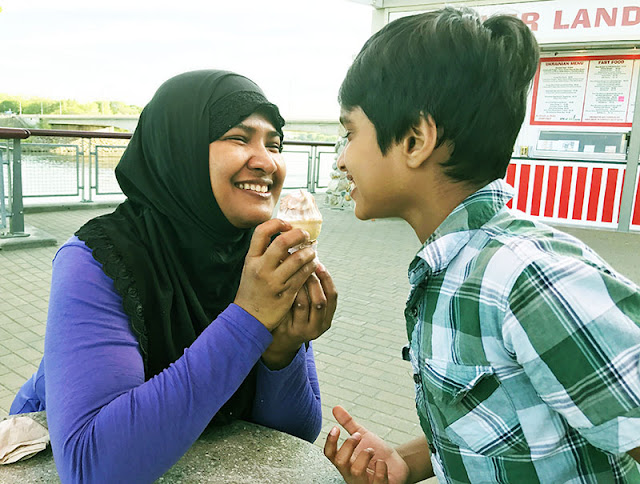 In my Saudi Arabia life, Teena was my best friend. We were living in the same compound in different houses. Both her parents were doctors. She was very beautiful, like her mom. She had a younger brother, named Faisal.

Both of our parents use to work full time. So, the whole day we stayed together and play together. She liked me. She told me so. Let me give you an example of her likeness.

During her aunt's marriage ceremony, they went to Bangladesh. Over there whoever says anything, she uses to reply, "Shimul apa says this thing should be done like this..... etc". Everyone became curious, who is this Shimul apa. Teena's mom replied, "Shimul apa is her Guru!"

Teena knew only one word in Arabic, "Keeda" which means, "This way". With this one word and her body language, she could explain the whole scenario.

One day Teena's dad bought her a bicycle. I didn't know or didn't put any importance on it. But my parents thought, now I may feel bad, if they don't buy any cycle for me. So, my dad took me to the market. We were living in a small town. And in the market, my dad couldn't find any other bicycle for me but the one Teena bought. She was younger than me, so it was her size. My dad looking for something bigger but a kid's version. But none was available. So, he had to buy the same one for me. I had ridden that bicycle with the training wheel on.

We returned to Bangladesh from Saudi Arabia before Teena's family did. One day Teena came to meet with us with her family. She stayed with us the whole day. In the afternoon her parents picked her up. That was the last time we met. On those days, whenever I felt upset, I wished to go to their house, but I didn't know where they live. Later I heard, they went to the USA.