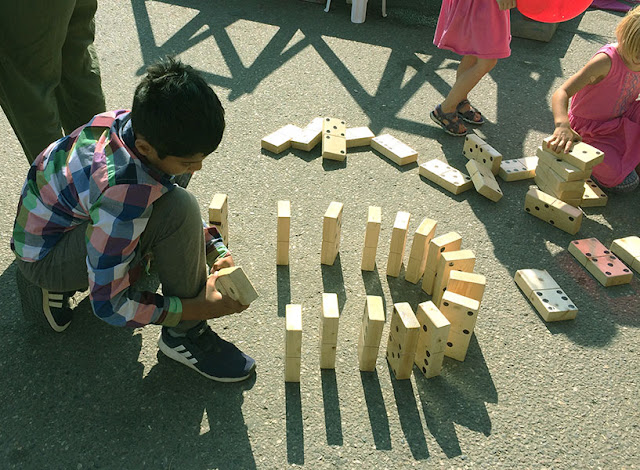 I liked to draw. OK, no laughing. No matter what was the outcome, I really liked drawing, mostly colouring pictures (Which had been drawn by someone else). In our primary (Elementary) school books, there were pictures drawn by any artists on every chapter, not coloured. I use to colour them, oh I loved that. That's why I use to colour one picture in a day so that I can have more days to colour those pictures.

In high school first thing that disheartened me is there is no picture in the books.

I had a plain paper book. I use to draw over there. Mostly scene. Whatever I could see, it could be from real-life or some pictures. I tried to draw exactly as it is. I never try to draw humans. I felt it is very difficult.

Every day one page. It was part of my everyday routine.

I think I continued like this till my school life (Grade 10). I never showed it to anyone. Because it wasn't good enough.

In our childhood, we had a popular game, which we use to play with our dad. We 4 sisters brought 4 pieces of paper. My dad use to draw the same designed lines on each of the four papers. We had to draw something with it by using our own imaginations. By this time father use to watch TV. After drawing something we brought back the paper to dad. Dad's duty was to give marks on each picture. You can guess who had got the lowest mark. I use to get angry at dad. I always believed I have shown enough creativity and made very good pictures.

Later in my educational life, I had to draw and all the teachers use to say, it's not good, but OK.

My grandfather could draw very well. My dad and mom too. But my gene doesn't have good drawing quality. My son proved that. In Bangladesh, he got failed in drawing (When he was in kindergarten). I had to take him to a private tutor for drawing only expectation was to make him pass the exam. He didn't want to draw over there too. The tutor complaint about that.

After moving to Canada, for the first, I have seen him drawing and colouring with excitement. He said, no matter how he draws, the teacher encourages him. So, he felt free to draw for the first time. Previously he felt it was a punishment. But his drawing quality is still very poor. I know, it's my gene. But when he is making designs in Adobe Photoshop or illustrator, I can see he really has good hands and creativity. You can some here https://www.facebook.com/Syed-Ali-Shafeen-1241548329229959