Book Review: ‘Bach, Casals and the Six Suites for ’Cello’ by Steven Hancoff 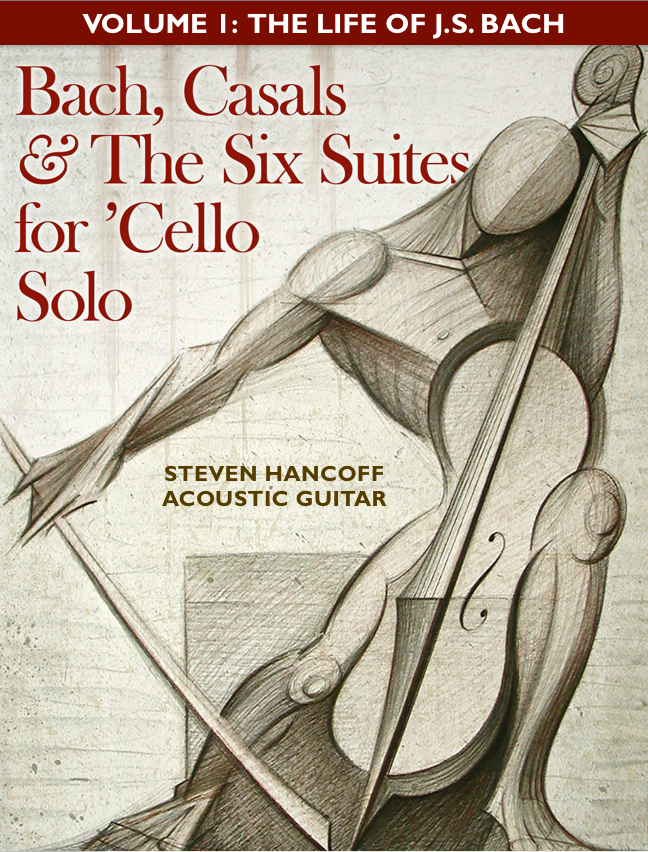 Bach, Casals and the Six Suites for ’Cello, a project that took Hancoff eight years to complete, is a fascinating, immersive multimedia extravaganza that combines music, history and art, a gem for classical music enthusiasts.

The ebook has four volumes:

VOLUME 3: PABLO CASALS AND THE SIX SUITES FOR CELLO SOLO

VOLUME 4: FROM TRAGEDY TO TRANSCENDENCE

Volume 1 is all about Bach’s life; volume 2 is about Bach’s death and the following 80 years of total obscurity until his music was discovered by Felix Mendelssohn; volume 3 focuses on Pablo Casals, his heroic life, and how serendipity brought him to Bach’s music; finally, volume 4 consists almost entirely on nine videos about the mystery and greatness of Bach, and how he didn’t allow his personal tragedy to define his music. Over one thousand illustrations grace the pages of the volumes, including three hundred works of contemporary art. There’s also a scholarly bibliography.

The four-volume ebook is available on iTunes and is accompanied separately by a 3-CD set recording of Hancoff’s acoustic guitar transcription of the suites. Readers may listen to samples here.

Like some other famous creative artists in history, Bach led a harsh life, losing his siblings and parents by the time he was ten, then having to work for years in an environment that didn’t support his music talents. He was even thrown into jail at some point. He never recovered from the death of his wife, whom he loved dearly. It was in times of deep pain and hardship that he created his sublime masterpieces, Six Violin Sonatas and Partitas for Violin Solo and then his Six Suites for ’Cello Solo.

The cello suites are a testament to the tragedy in his life, to all the pain and sorrow, but also to his determination and transcendence—a gift to his then gone beloved wife. Particularly interesting and surprising is how Bach’s prodigious music almost fell to oblivion if not for the efforts of Felix Mendelssohn’s great aunt, and how Pablo Casals discovered the suites in a little shop in Barcelona and how he studied them for over a decade before performing them in public.

Steven Hancoff’s passion and reverence for Bach and his music resonate throughout and shine through the pages of these volumes. He’s done an admirable job presenting “the miracle of Bach,” as Casals once put it. Moreover, his transcriptions of the suites in acoustic guitar are a pleasure to listen to: serene, bitter-sweet at times, filled with emotional power and depth, always sublimely beautiful.

Bach, Casals and the Six Suites for ’Cello is a feast to the senses, a testament to the greatness of Bach and comes highly recommended from this reviewer.

Listen to a samples Steven Hancoff’s transcription of the six suites here:http://www.stevenhancoff.com/music.html

Watch the video “Bach in 3 Minutes” on YouTube: https://www.youtube.com/watch?time_continue=19&v=QZmmIIMBBug

My review was originally published in Blogcritics. I was given a copy of this book in exchanged for an honest review.