Did I Say NEVER?

With Jackson I was a very laid back parent.  Don't get me wrong.  It wasn't that I didn't discipline him.  I was just still somewhat of a child myself.  I didn't follow schedules.  I didn't enforce nap times.  I wasn't strict about what he ate or how much TV he watched.  I looked at other parents and thought wow, they are strict.  Poor kid.  I could never be like that with my kid.  Then I grew up. 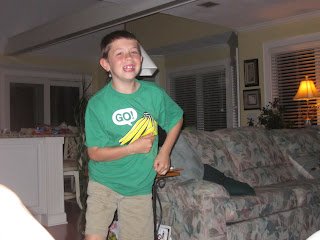 And now with Miller I have realized that I'm THAT mom.  I was mentally checking off the list of things I said I would never do when Jackson was little and I think I'm pretty close to hitting every one of them.  For example:
-I will never let my baby's schedule dictate my life.  Hmmm, have I mentioned we have to plan even grocery trips around Miller's naps?  Cross that one off.
-I will never use the cry it out method.  My baby can just sleep with me.  After 2 months of sleepless nights, we cried it out together and he is now sleeping well (OK, it's only 90% of the time but still!) in his own bed.  Mark that one off too.
-I will never be the parent that won't put my baby in the nursery.  Miller is 5 and a half months now and he is old enough to go to the nursery when we go to church but I can't do it.  It T-E-R-R-I-F-I-E-S me!  His little squealing noises don't distract from the sermon too much;-)  List is officially thrown out the window now. 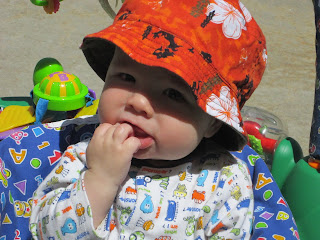 I could go on and on about the things that I was NEVER going to do as a mother.  But now I only have one thing on that list and here it is.  Wait for it...
I WILL NEVER SAY THAT I WILL NEVER DO SOMETHING WHEN IT COMES TO MY CHILD! 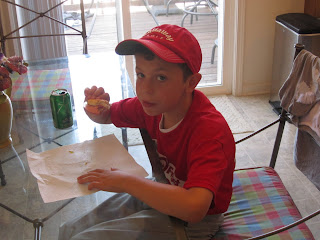 Yup, lesson learned.  And I'm eating crow.  So I officially apologize to all the mommies out there that I looked at in disbelief when they would leave a party early to take their child home for nap time.  Or those that I gave angry glares to because they had their children with them constantly even when they were old enough to be in the nursery.  So sorry y'all.  I finally understand!  And I will gracefully accept the criticism of others when parenting techniques enter the conversation.  Because in the end, I've done the best I knew how with both my boys and I can be proud of that.
Have I done it right?  Who knows?  But be sure to check back in 20 years.  I'll let you know the outcome of both my parenting styles.  Hopefully I will have two well adjusted young men.  And if not, I'll take full responsibility and make sure I have great insurance that can pay for their "blame it on mommy" therapy! 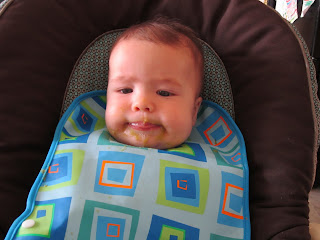 Thanks for taking the time to get to know me! Your post is very cute!  :  )

Hahaha!!! I know just what you mean. When I was pregnant I had my whole delivery planned out and exactly what mommy life was going to be like. Not one thing has gone how I planned and I have just come to realize this whole motherhood thing is a play it by ear game because nothing goes the way that I think it will.

Thanks for welcoming me!  Great post!  It's honest and fun to read.

Comment by Laura Waters on September 26, 2011 at 8:10pm
I love you post! It is so true, and it feels so goofd to know you are not the only one!! I enjoyed reading this very much!!

Great Post! I think most moms have been here!

Great Post! I could identify with a great deal. I remember when having my first child and having he at home for the fist week, i wanted to apologize and cry to my parents and tell them what a spoiled brat I was too them LOL.

Every mother has their own way of parenting, there is no wrong or right way as long as it's done in the best interest of the child, and that child is happy and healthy.  thanks for the add

Love this post!  I just can't put our baby in the nursery yet either.  Thanks for adding me too :)

Comment by Mikki on August 5, 2011 at 7:40pm
Thanks so much for welcoming me! I look forward to participating in your blog hop!

Comment by MIna on July 17, 2011 at 4:55am
Thank you for this post. Growing up as an only child, my parents never set down a schedule or enforced rules. They were strict when I was a teenager, but they did not enforce rules like: bedtime, study/tv time. I never slept in a crib, I watched Letterman every night. There were no in-house rules. As an adult I struggled with this. When I became a wife, I pretended like I knew how to do chores, laundry, etc. when in actuality, my mother always did them. Now 16 months into being a mom, I am starting to become a regimented mom. I think that I finally grew up. It is a struggle now that I am shifting a bit; I love him enough to know that he needs the stability that I did not have. It is amazing what one little boy can do to change my whole world :)