Finally! Peace of Mind While Your Baby Sleeps

When parents have a baby especially for the first time it can be one of the most stressful times in their lives. Babies require attentive care not only when they are wide awake, but also when they are sound asleep. According to WhatToExpect.com, babies should sleep in rooms that are 68 - 72 °F (20-22°C) in the summer and in the winter. Additionally, they shouldn’t be swaddled too tightly or be clothed when they are asleep in more layers than the adults in the home.

Due to Sudden Infant Death Syndrome (SIDS) that takes the life of more than 2000 babies every year, it is important to reduce the risk factors as much as possible even though there is no definitive cause for SIDS. For example, removing loose fitting bedding in cribs, putting babies to sleep on their backs instead of their tummies, and also making sure they do not overheat are ways to reduce Sudden Infant Death Syndrome. Being vigilant about these is critically important especially during a baby’s first four months as most SIDS deaths occur during this time frame although babies can die suddenly up to a year.

One product on the market that helps put parents at ease when their baby is sleeping is Tempi. Created by a dad, Arif Quronfleh, who worried about the temperature in his daughter’s room, Tempi uses Bluetooth to monitor and track both temperature and humidity in a room and sends alerts via its app if the temperature, humidity or both get too high or too low of your settings. Small enough to fit anywhere in your baby’s or children’s room, Tempi sits directly into its stand and you can easily monitor its data from your phone. In fact, you can put Tempi anywhere including on your purse since it also has a clip, in your car, or anywhere you would like to monitor temperature and humidity. If you would like to monitor two rooms at once, you can buy two Tempi devices and both will be monitored in your app. Data is also stored for a year.

Some people even use Tempi to monitor their baby’s covered stroller temperature while they sleep. However, doctors do warn that babies could die from SIDS if you cover a stroller with a blanket on a sunny day as the temperature my reach over 90 °F (32°C) inside the stroller. 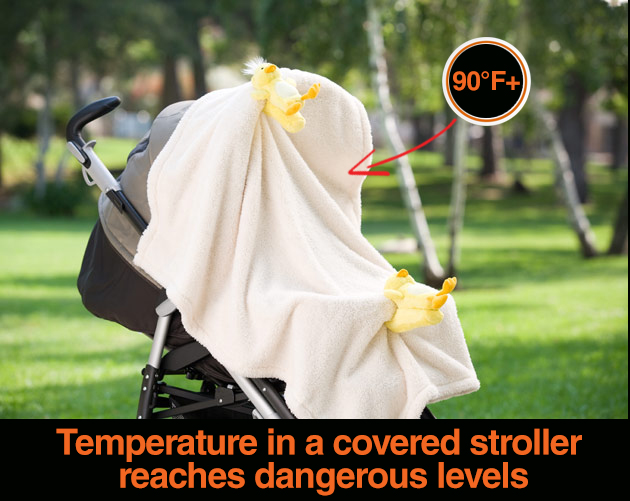 Whether on the go, or at home, Tempi gives parents the peace of mind that their babies and children are having a sound and safe sleep based on the temperature and humidity around them. With detailed, exact data, size, cost and mobility, Tempi was a 2018 finalist in Good Housekeeping’s Best of Baby Tech Awards. At less than $45 Tempi is economical enough to buy several for various locations in and around your home.

Visit mytempi.com for more information. Use code BABY10 to get a 10% discount.