From the bottom of my heart, I salute you

We were in honours final year, at the University of Dhaka. For our study tour, we went to Cox's Bazar. Here we have the world's longest beach beside the Bay of Bengal.

As far as I remember Chaity with a bunch of her other friends asked me and Shumi to go a little deeper into the ocean. They were holding hands with each other and made a circle. We joined. Whenever any wave comes, we jumped. It was really amazing. They continued to go deeper. Water came near to my chick. Shumi almost got drowned. Chaity and I decided, it really became difficult for Shumi so I and Shumi will go back to the land. We hold our hands and slowly moving towards the land. In the meantime, a strong wave pushed from our backside, mainly I felt the hit on my feet and it moved my feet upward. I drowned in the water. The moment I was falling inside the water I had held my breath. Then I tried to put my feet on the sand but I couldn't because of the water force moving forward. I tried to take my head up but another wave was running from the land to the water which didn't let my head go up. I tried to draw the picture (Very poor, please ignore my drawing capability) to describe the situation. 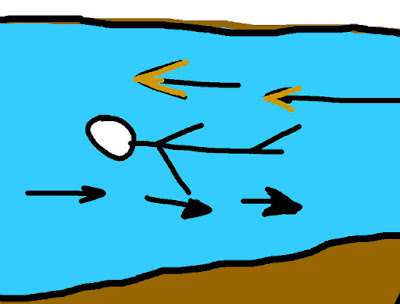 Because of both different directions strong wave, I couldn't eighter go up or put my feet down on the sand. I have started thinking who saw me get drowned? Maybe no one. let's wait, maybe the wave will take me near the land. The way I'm telling the story you might think it took a long time, but actually a few seconds pasts.

Suddenly I felt, someone, is holding my hand and trying to pull me up. I hold that person's hand too, to go up. But then the hand went away. I understood, that person might be thinking I will hold tightly and will make that person drowned too. So I have started waiting for those hands. It came and hold me again. This time I didn't try to hold back. That person pulled me near Shumi and Shumi noticed me in the water. She pulled me out by grabbing my headscarf. I could start breathing and stand on my feet. Then walked to the land.

After all this trouble, when I could start thinking normally, I look around to know who helped me in the water. I have asked Shumi too, did she hold my hand? She said, no. I couldn't find anyone who tells me that they helped me or asked me whether I'm ok or not.

I have thought about this many times all these years. Who was it? Is it any unknown people? Maybe not, because we were kind of surrounded by our classmates. But no one was near me. As far as I could think. After the incident, Saleh used to say to his other friends that "You guys get drowned at the knee lever water!" I had a doubt about him but never asked. Didn't know what he will think if I asked.

After all these years, recently I asked him. Did he know that I drowned at the Bay of Bengal? He replied, Yes.

Saleh, with a big smile "Yes, it was me"

Oh Allah, and I didn't know. You are the only person I guess who noticed that I get drowned. Thank you, my friend. From the bottom of my heart, I salute you.

Teething period in Marriage,a must know!