Get a Good Night’s Sleep With Sambrosa 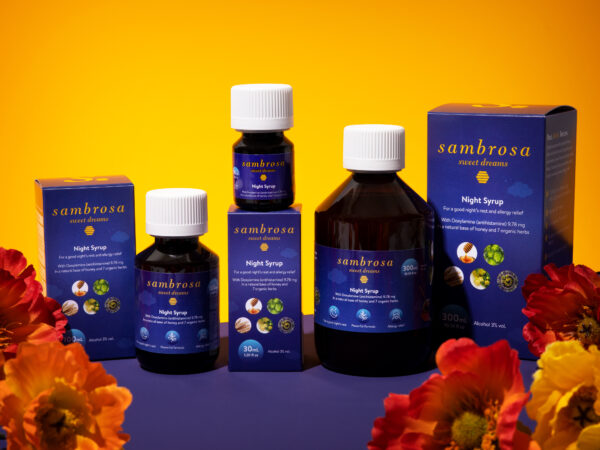 Over the past year and a half, I have to admit that getting an adequate, peaceful night’s sleep has been difficult. Between worrying about COVID-19, bills, our kids’ schooling, our health, my elderly family members, and just thinking about the unrest during this time, calling it stressful would be a massive understatement. I haven’t had many nights where I wasn’t restless or lying in bed staring at the ceiling to put it mildly. Even though I know how important it is to get enough rest so we can all conquer our days, it is hard to do when there is so much to worry about.

I must admit I thought about going to the drug store and buying a sleep aid to get more rest, but I remember I did that a few years ago and instead of feeling refreshed after a night’s rest I felt extremely sluggish. So, that was certainly not an option. I tried going to bed earlier, but I would just wake up at 1:00 in the morning and just stay up until I saw the sun come up. That’s torture.

I also tried eating a little better and going to bed at a more reasonable time. Still,I would wake up in the middle of the night and not fall back to sleep. And, of course, I tried the “drink two glasses of wine and go to bed” remedy. That worked for a few hours, but again that failed.  I don’t know what it is about nighttime, why it’s so very difficult to turn off and get the rest I need. That’s why I was super excited to receive Sambrosa, a nighttime sleep syrup supplement. Unlike the sleep aid I thought about buying previously at the drugstore, Sambrosa has ingredients that I can actually pronounce and I am so happy to say that it worked!

First, the main ingredient in Sambrosa is honey, so it tastes good and not like cough medicine. It also has a heap of organic herbs in its ingredients list that makes you feel like you are taking something that will help you and not harm you in the long run. In it, you will find California poppy, hawthorn, hops, mistletoe, oat, passionflower, and white chestnut. There's also a small dose of doxylamine.

When I first tried Sambrosa I took it after I ate a particularly heavy meal. That night I slept a lot longer than I had any other night. When I woke up I thought that perhaps the meal and Sambrosa working together gave me a better sleep. To test the effectiveness of Sambrosa I took it at 11 PM one night, hours after my last meal, and what I experienced was a peaceful sleep at long last. I slept through the night for once in a very long time and when I woke up I wasn’t groggy. Instead, I felt like I had slept better than I had in many, many months.

To be honest, I thought that Sambrosa might not be as effective as its messaging touts simply because it uses herbs. In some of my past experiences, herbal remedies have been either hit or miss. Sambrosa is a hit in my house. Now my husband takes it as well.

I recommend that if you take Sambrosa, take it as early at night as possible, around 10 or 11 PM. Don’t wait until you wake up at 3 AM and then take it because in all likelihood you probably won’t wake up at your normal time or you’ll still be sleepy when you do.

How to Buy and Sell a Car as a Non-US Resident?

Lisa Alix is now a member of Mom Bloggers Club
yesterday
Welcome Them!