Join Us This Thursday for the #BetterTogether Twitter Party

Despite living in one of the most abundant countries in the world there are still Americans who live in food insecure situations. Of course, this disproportionately affects children and families. In fact, 1 in 6 Americans go hungry every day and in 2011, households with children reported food insecurity at a significantly higher rate than those without children, 20.6 percent compared to 12.2 percent, according to Feeding America. 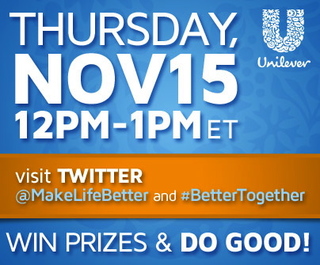 This holiday season Unilever has partnered with Feeding America™, the FEED Foundation, and #GivingTuesday™ to raise awareness about hunger in America. According to Feeding America in 2011, 50.1 million Americans lived in food insecure households, 33.5 million adults and 16.7 million children.

We are particularly honored to be a part of a Twitter party that is so helpful to people in need! We would love for you to join us.

Prizes: One2One Network will be giving away 15 Unilever gift baskets filled with food and personal care products throughout the hour, AND Unilever will donate 500 meals in the name of each winner to Feeding America™. Giving and getting—what could be better than that?