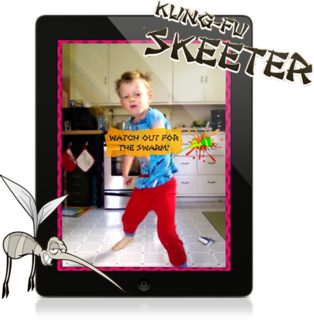 What we have learned as moms of active little ones and as mom bloggers who read a ton of moms who blog who also have active children is we all love apps that allow our children to have fun, burn calories and be active. What the iPhone and the iPad have done for sheer kid entertainment is nothing short of amazing. Apps teach children new skills and have helped create a new generation of "mobile kids".

Tadami has created a new app, KungFu Skeeter, that is currently on sale for the iPad 2 or 3 for FREE, but only for a limited time! Launched on October 5, KungFu Skeeter allows children to squash little "skeeters" that pop up on the screen even when they are two to twenty feet away from the iPad. Using the iPad's camera, KunguFu Skeeter is like a virtual, mobile 21st century whack-a-mole.

Take a look at kids in action playing KungFu Skeeter in this cute video.


Now that the weather is getting cooler outside in most of the country, it is becoming harder and harder for parents to find something for their little ones to do to stay active while the weather is crisp and cold. KungFu Skeeter is a great way for children to burn calories while having fun! Exercise is so important and having a tool on hand that kids love is a win-win for not only mom, but for kids as well.

KungFu Skeeter is FREE in the app store. It is compatible with iPad and requires iOS 5.0 or later. Randi updated their profile
1 hour ago

What Do Security Guards Actually Do?

As a parent, protecting your child and looking out for their well-being is easily your biggest responsibility. But when they start behaving differently for no apparent reason, you may feel powerless when you don’t know what the cause is.

Now that so many of us are at home due to COVID it becomes more and more difficult to find quality, family-friendly content for our children. We don't want them on their phones and tablets all day long and your children probably know every episode of their favorite cartoons by heart by now. Media consumption is so critical…

Imagery is an essential part of blogging as it supports, and even enhances, your blog's readability. You need relevant and quality pictures to make your blog visually appealing and engaging. These 5 tips for better-looking blog images can help you reach a wider audience, drive…