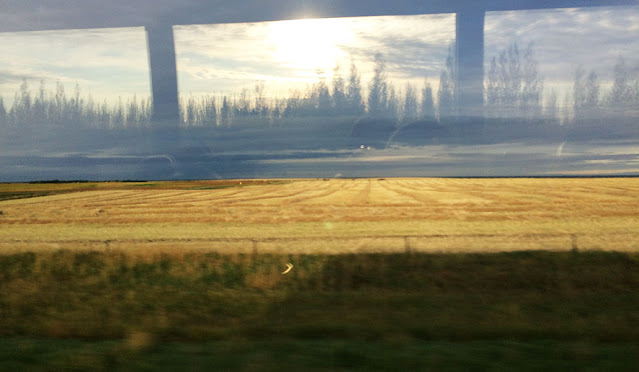 In Saskatchewan, I have seen every water tap has two openers. One is for hot water another one gives chilled one. We had to open both to get the water temperature we want. It's mixed with both tap water to make the one we want. This actually gives little trouble to figure out how to make the perfect temperature water and make more water waste because we mix and test again to change both water flow.

In Ontario, we have one water tap. You can move it around to get the water temperature you want. It is easy to manage and makes less water waste.

In Saskatchewan, the commode flash tank is bigger, which makes more water waste, because you don't need a full tank of water always. In Ontario, they have changed the system. So it flashes less water. If needed you can flash a couple of times. I know, The city of Saskatoon is already thinking to apply that in their city.

Saskatchewan doesn't have any streetcar or tram in the city. No underground or sky train. I will say The city of Saskatoon should start plan about it (If they are not already). Because the city is growing. You will need that in future. Why start planning and make it happen now. The city stays under snow most of the time of the year. I believe an underground train will be a good option when roads became very dangerous.

The security guard course is very high in Saskatchewan. Even the exam fee for a driving license is also very high. When another cost of the city is less than Ontario, then why these fees are too high?

Saskatchewan people are very friendly to the new face or stranger. In Ontario, if you say "Hi" to a stranger, that person will be suspicious and won't answer you.

Saskatchewan people expect a welcome greet from any shopping mall. People get upset if no one welcomes them properly. In Ontario, nobody bothers about it.

The Fall is very colourful in Saskatchewan, mostly the trees become yellow and orange coloured. Ontario has more red in the colour.

Though both provinces are in Canada, both of them have many dissimilarities.