Nikki is now a member of Mom Bloggers Club
11 hours ago
Welcome Them! 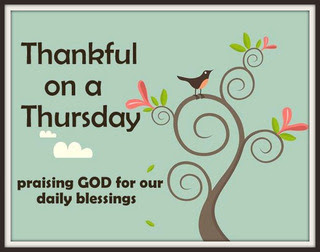 Today I'm Thankful for the a few things. First of all, I'm so thankful for getting the chance to work
with Jumping Jax Designs. She has created my new blog design, and I love it. She is so helpful and
she had my blog done in 24 hours. Super fast and very responsive to questions you have.
Ok, let's get back on my original topic.....
This might seem really silly, but I'm really thankful I got to see this. So, everyone knows that the World Cup Soccer tournament has been going on for the last week and a half or so.
If you are asking yourself what is the World Cup, are you kidding me!?! :)
What is Soccer? - The best sport on this planet except for Rugby!
So, anyway back to the story.
Yesterday the USA played Algeria in a elimination round. However, like most of the people I had to
work. I've been recording all the games at home on my DVR. Thank you DriecTv. Yesterday I was trying to ignore all Facebook status updates and Tweets regarding the game, because I was recording it and I wanted to wait until I got home to watch it. The person sitting next to me at work (marea) said the USA just had another goal take away! I plugged my ears la.la.la.la. I told her that I was going to watch the game when I got home. To say the least it was hard to not get involved in everyone's conversations about the game. I was starting to get a little hungry so I went over to the Deli and got a breakfast sando. I'm walking over there enjoying my fresh air and the sunshine that was peaking out. I walked into the deli and......

The Game was on!?!
As I walked in the USA was attacking the goal and the ball was finished. The goal keeper for Algeria made a great stop, but unfortunately deflected the ball right back in front of him about 5-7 yards. Landon Donovan came running in and BAM!
Gooooooaaaaaaaaalllll!
The ball hit the back of the net. I instantly was jumping up and down in the Deli, well everyone else was too! :) I was super excited that I got to see the winning goal live. I didn't go home last night and watch the whole game, how can you relive that moment when you know the exciting ending. I'm thankful that my belly was growling and I decided to go to the Deli when I did.
Also, another exciting thing as well. My mom's whole side of the family is from New Zealand. So, I'm half Kiwi. The All Whites, from New Zealand have made the 2010 World Cup in South Africa. They are doing amazing. They tied Slovenia and tied Italy. Which is huge. They haven't made a point in a World Cup since 1982. Very exciting to watch and awesome for New Zealand! 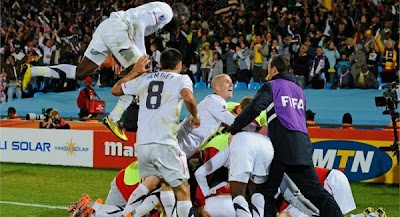